Dogs are inquisitive creatures and love to explore every corner of their world. Their eyes play a crucial role in their ability to investigate their surroundings. The team at Veterinary Vision Center wants you to know about entropion, which can threaten your dog’s vision if not recognized and addressed promptly.

What is entropion and what are the causes in dogs?

Entropion is a condition in which the eyelid rolls inward, causing the eyelashes and surrounding hair to rub against the dog’s sensitive cornea. The upper and lower lids can be affected in one or both eyes. Entropion results in eye irritation, and if not remedied quickly, can lead to corneal ulceration. Entropion can be genetic or secondary to another issue.

What are entropion signs in dogs?

Dogs affected by entropion exhibit general eye discomfort and will usually rub at their face and be light-sensitive. Short-nosed breeds typically have excess tears, bloodshot eyes, and profuse blinking, while giant and sporting breeds tend to have mucoid or purulent discharge from the outer corner of their eyes. The signs seen in dogs affected by secondary entropion depend on the primary cause, but usually include ocular discharge and squinting. If the entropion leads to corneal ulceration, the cornea may cloud over and appear white or blue.

How is entropion diagnosed in dogs?

Your veterinarian will diagnose entropion when they observe your dog’s eyelid rolling inward. If your young puppy has not opened their eyes by 5 weeks of age, the puppy’s eyes should be evaluated for entropion.

Once entropion is recognized, the eye will be evaluated for corneal ulceration. A fluorescent dye is applied to the cornea, and the ulcerated cornea will absorb the dye, while healthy tissue will remain clear. If your dog’s cornea is damaged, they will need aggressive treatment to prevent infection. This typically requires the administration of topical eye drops or ointment several times a day.

How is entropion treated in dogs? 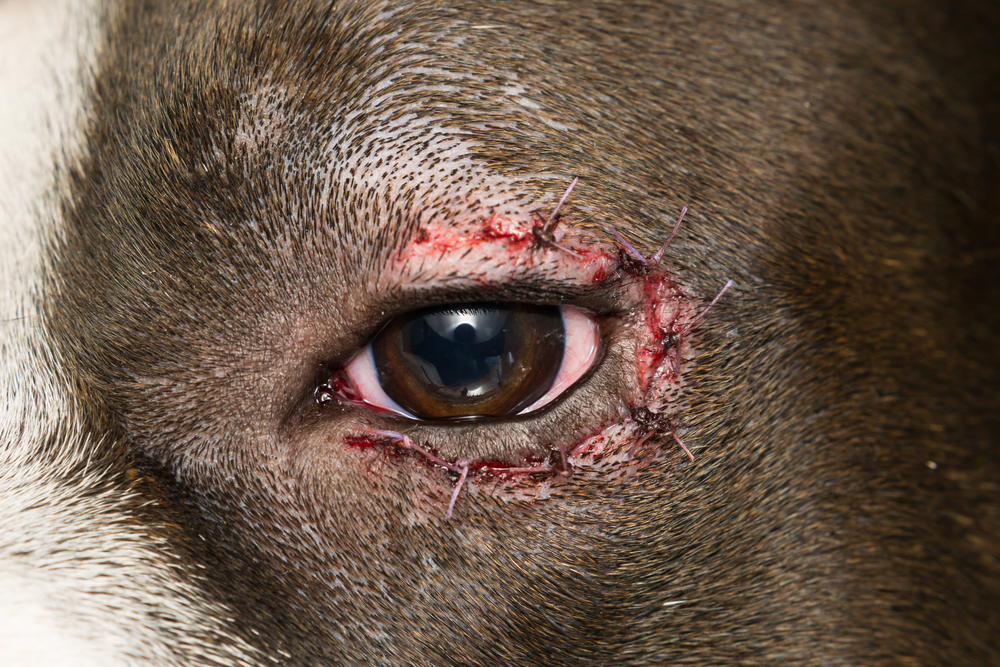 In secondary entropion cases, resolving the primary problem may correct the entropion. Treatment with antibiotic ointment can lubricate the corneal surface and protect against corneal damage. In mild cases, antibiotic ointment may be sufficient to alleviate your dog’s discomfort.

However, in most cases, surgical correction is required to resolve the entropion. To ensure your dog has grown into their adult facial features, they should be at least 6 months old before the surgery is performed. Dogs younger than 6 months may need their eyelids tacked until they are old enough to have the complex surgery. Tacking involves placing temporary sutures to fix the eyelid in the appropriate place. Shar pei puppies as young as 2 weeks old can be affected by entropion, and this procedure works well for them. In older dogs, a surgery called blepharoplasty, which entails removing the excess skin of the lids, as well as excess skin that causes skin folds, tightening the eyelids, is performed. Recurrence after surgery is rare, except in severe cases, as seen in Shar peis. Blepharoplasty should be performed only by a board certified veterinary ophthalmologist.

What is the prognosis for dogs with entropion?

As long as the condition is caught early and the cornea has not sustained any damage, prognosis following surgery is excellent. If the cornea has been affected, the prognosis depends on the extent of the damage. Ulcerations can cause corneal scarring that inhibits vision. Badly infected corneal ulcers may require eye removal. After surgery, your dog’s eyes will need lifelong veterinary monitoring to check for recurrence, and to help ensure their cornea is not damaged. Dogs affected by entropion should not be used for breeding.

Entropion is a serious problem, but if caught early, the effects to your dog’s eyes are minimal. Observe your dog’s eyes daily to ensure you recognize any abnormality that may arise. If you are concerned about your dog’s eye health, contact Veterinary Vision Center to schedule an appointment.