Several factors can result in injury or infection in a snake’s spectacle, which can lead to impaired vision, and potentially affect their ability or willingness to eat. Our team at Veterinary Vision Center wants to provide information about spectacular diseases in snakes to ensure your affected reptilian pet gets the care they need.

The spectacle is a transparent structure that covers the snake’s eye. During embryonic development, the snake’s eyelids fuse, preventing palpebral fissure formation (i.e., the area between open eyelids) and resulting in spectacle formation. This structure is a type of scale that protects the cornea. The spectacle does not adhere to the cornea, which creates the subspectacular space that contains a tear-like secretion produced by the Harderian gland inside the eye’s orbit. The fluid lubricates the subspectacular space, allowing the snake’s eye to move freely. Nasolacrimal ducts drain the subspectacular space fluid into the mouth near the vomeronasal organ, which helps the snake hunt and track their prey. Since the spectacle is a scale, the structure sloughs at regular intervals during normal ecdysis (i.e., shedding old skin). The spectacles are clear, except prior to shedding, when they turn bluish-white. Spectacle damage causes include being fed live prey, inappropriate environment, dysecdysis (i.e., abnormal shedding), incorrect retained spectacle treatment, infection, and parasitic infestation.

Retained spectacles are the most common ocular abnormality in snakes. Causes include insufficient humidity, nutritional deficiencies, decreased thyroid function, infectious diseases, and lack of suitable abrasive surfaces in the environment. If the retained spectacle is not removed, subsequent sheddings will also be inhibited, and a thickened dead skin mass will cover the snake’s eyes. Addressing a retained spectacle includes:

Abraded and avulsed spectacles in snakes

Spectacle injury is a serious condition with potential problems that include:

Mites and ticks can be found around a snake’s eyes, commonly between the facial periocular scales, and can be physically removed by flushing. Appropriate antiparasitic treatments should also be administered.

When the naso-lacrimal duct is blocked, secretions from the Harderian gland accumulate in the subspectacular space, and the spectacle bulges. Naso-lacrimal blockage can be caused by infection, pressure, scar tissue, or a congenital abnormality. Treatment typically involves draining the fluid through an incision in the spectacle, and administering topical antibiotics, although a new drainage route must be established in some cases. 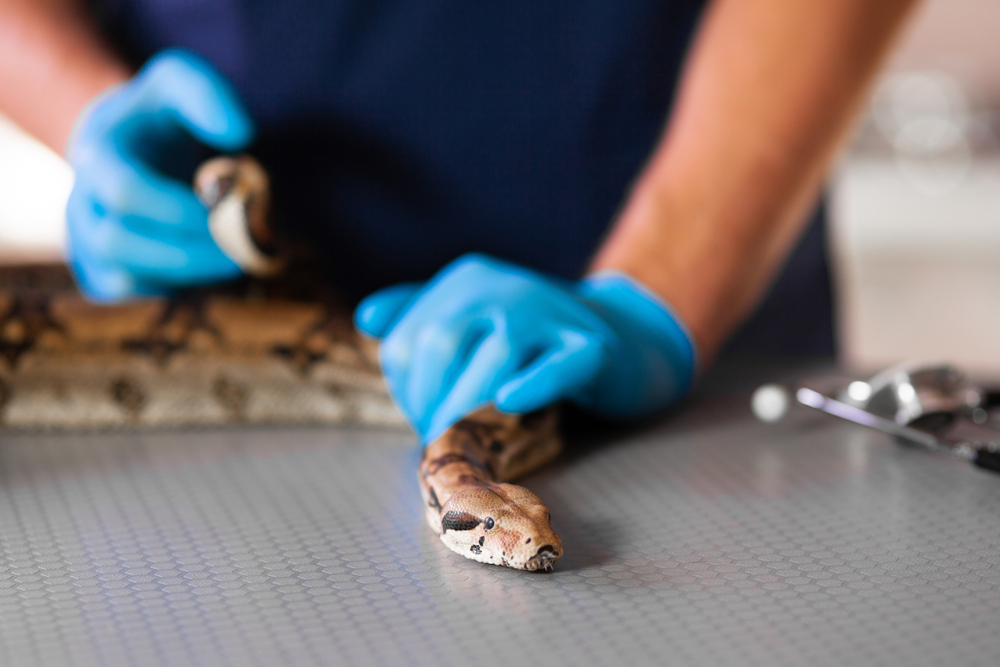 Eye infections caused by bacterial or fungal pathogens can cause subspectacular abscesses. These infections are most commonly caused by an ascending infection from the snake’s mouth, but can also result when a foreign body penetrates the spectacle, or the snake has a systemic infection. Subspectacular abscesses cause a bulging spectacle with white, yellow, or green abscess fluid, whereas the fluid inside the spectacle in a naso-lacrimal blockage is clear. Treatment involves creating a drainage port in the spectacle and lavaging the subspectacular space with a balanced salt solution. Cultures are needed to determine the pathogens that are present, to prescribe the correct antibiotics or antifungals.

Your snake’s spectacles are important, and ensuring you maintain your pet’s environment appropriately will help prevent spectacular diseases. If your snake has a spectacle problem, contact our team at Veterinary Vision Center. We can help preserve their vision.