Uveitis is a general term referring to inflammation affecting the intraocular vascular uveal tract. The tract is comprised of the iris (i.e., the colored part of the eye), the choroid (i.e., the thin tissue layer between the retina and the sclera), and the ciliary body (i.e., the structure that connects the iris and the choroid). In 1996, a uveitic condition specifically affecting golden retrievers was first described in the scientific literature. Our team at Veterinary Vision Center would like to educate you on this concerning disease, to ensure your dog’s condition is diagnosed early.

What dogs are affected by golden retriever uveitis?

Golden retriever pigmentary uveitis (GRPU), also known as pigmentary uveitis, typically presents in dogs 8 to 8.5 years of age, but has been seen in dogs from 4.5 to 14.5 years of age. Male and female dogs seem to be equally affected. The condition has been diagnosed exclusively in golden retrievers, golden and labrador retriever crosses, and golden retriever and poodle crosses. This indicates that GRPU is hereditary, but the condition’s late onset has made controlling the issue difficult, because affected dogs may be bred several times before signs occur. GRPU is now widespread across the United States and Canada.

GRPU is a unique uveitic condition affecting golden retrievers that is not associated with other ocular or systemic disorders. Both eyes are typically affected. Adhesions, or scar tissue, develop between the iris and the lens, and between the peripheral iris and the cornea. Pigmented cells from the iris are disrupted, and dispersed on the lens. In the early stages, affected dogs exhibit only signs that include redness and minimal drainage, making early diagnosis difficult, and the disease can advance before evaluation by a veterinary professional. Secondary conditions, including cataracts and glaucoma, also commonly occur, and can lead to vision loss.

How is golden retriever uveitis diagnosed in dogs?

The iris’s pigmented cells disperse on the lens in a radial pattern, resembling the spoke on a wheel. This radial pigment on the lens is considered GRPU’s hallmark. The American College of Veterinary Ophthalmologists (ACVO) recently published clear GRPU diagnostic guidelines.

Fluid filled cysts on the iris, ciliary body, or choroid, which are considered risk factors for GRPU development and progression, may also be observed.

How is golden retriever uveitis treated in dogs?

Since the underlying disease mechanism is not known, treatment is focused on controlling the signs.

What is the prognosis for dogs affected by golden retriever uveitis? 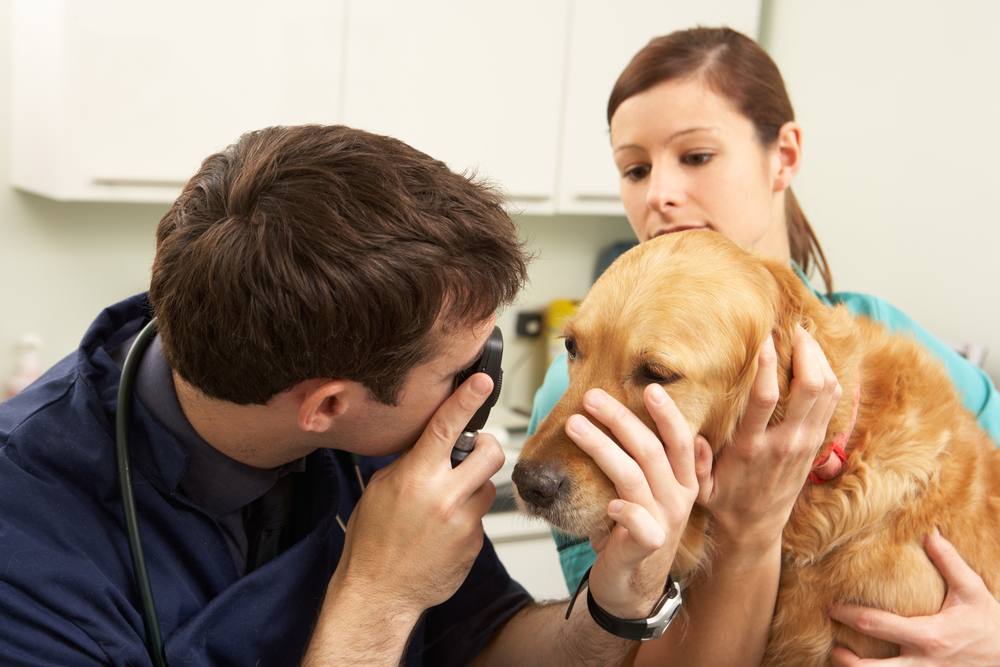 For dogs with GPRU, the prognosis for maintaining their vision is guarded. When detected early, treated consistently, and monitored regularly, some dogs can go years without significant complications or vision loss. However, when diagnosed in the later stages, management can be difficult, and their vision cannot be saved. Treatment should continue after vision is lost, because blind eyes can still be painful, and your good-natured golden retriever will not show outward signs that they are in pain.

Annual eye examination by a board-certified ophthalmologist is recommended for golden retrievers and golden crosses, since early detection and treatment initiation appear to slow GRPU progression. If you would like your golden retriever screened, or if they are showing uveitis signs, do not hesitate to contact our team at Veterinary Vision Center, to schedule an appointment.